This is me, preparing the garden for the fall crop. I don’t own a tiller.

Oh, I purchased the contraption once—under the mistaken impression that every good gardener should have one. It was expensive . . . hard to start . . . at the repair shop more often than not. It was loud, heavy, and whipped up the soil like my KitchenAid mixer with cream.

It’s not good for the garden bed to be disturbed that way.

This violent action can harm the organisms that live underground. Earthworms are the first ones that come to mind, but there’s an entire magical world below that humans barely realize. A wide variety of organisms work with plants to help them uptake water and nutrients, such as nitrogen.

Mycorrhiza, for example, is a fungus that has evolved alongside of plants. This guy attaches itself to plant roots, forming a symbiotic relationship. The fungus improves the plant’s ability to absorb water and the plant shares its bounty with its host. Most flowers and veggies produce better through this cooperative bond. 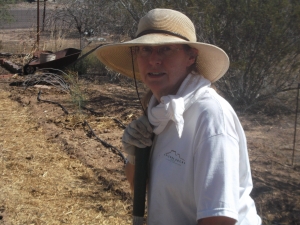 Each of my ten rows is thirty feet long. Most people use a hoe to make a traditional hill-and-valley garden-bed configuration, seeding the upper hill crest and using the valley to transport water to the roots. In the hot desert, the raised soil become a heat zone and as moisture evaporates, salts accumulate on the upper ridges of the rows, forming white lines.

I don’t plant this way. I rake smooth a flat planting bed that’s forty-two inches wide. Then I form an earthen berm perimeter around my ‘row’ to prevent water runoff.

Sometimes I don’t use a shovel at all prior to planting. A hand trowel can rough up the surface of the soil enough to plant seeds. Compost, added on top, keeps the delicate guys moist while germinating.

This row that I’m digging today, however, will hold broccoli seeds, which are particularly attractive to certain insects. I’ve watched tiny, almost invisible, bugs hide beneath loose pieces of compost and eat the seedlings as they slough off their seed coating. That’s why I’m working the compost into the soil with a long-handled shovel and then raking the surface smooth prior to planting.

Lettuce, however, doesn’t seem quite as prone to these bugs. I think I’ll try the compost sprinkling method with them this year.

I need to finish this row, so it’s back to digging—just me and the shovel.

It’s a quiet morning. My turkeys have finished their morning meal and now they’re strutting and gobbling. Wild birds twitter in a nearby tree. A June Bug hovers right in front of my face, flashing neon green. We stare at each other for a brief moment. Then he buzzes away and lands on a leaf cluster of a nearby mesquite tree, bending the little feathery twig low. Another June Bug joins him on that spot. Perhaps he has a lady friend.

One thought on “Me and My Shovel”