Many years ago, I had an unpleasant experience with a goat that left me fearful of the animals. So when my husband, Jimmy, suggests buying dairy goats for milk and meat, I’m surprised.

I agree, reluctantly, to purchase three animals as long as we buy a small-statured variety.

“Jimmy, I’m the one that must man-handle and milk them every day. I don’t have as many muscles as you.”

“All right, I understand you need to become comfortable with goats and milking. However, small animals may not produce the level of milk we need.”

To overcome my concerns, he researches online to find a short dairy variety, later suggesting a breed called Nigerian Dwarf. An appointment is made to view some animals with a local seller.

When we arrive at the address given in the advertisement, two black-and-white does (females), both in milk, are tied to a post.  These must be the animals that are for sale. A baby boy goat, called a buckling, nurses from one. He gives the teat a firm head-butt to start the flow and then latches on and suckles. The seller says he will give us a cheap price if we purchase all three goats.

The farmer’s son, about five-years old, inches toward us. “Are you gonna buy Moses?”

He points to the buckling still suckling from its mother.

At home, we unload the three animals, which are frightened because of the unfamiliar surroundings. We put them into the chicken coop and give them alfalfa and grain.

“Jimmy, what about names for the goats?”

“No, I don’t want to name something I may later eat.”

“We have to distinguish one animal from another. We can’t just call them number one, two, or three.”

My husband sets his jaw, “And a goat that may be eaten someday is not going to be called Moses!”

That’s how Moses becomes Moe. The two does have colored collars, one blue and one red. These color descriptors soon become their names, Blue and Red. The titles may lack imagination, but then a stock animal is not a pet. It’s food.

Yes, I need to keep reminding myself about that.

The first day with our new dairy animals is a challenge. We have no idea how to milk a goat, or a cow, or . . . anything. Jimmy does some research on the internet, but some things are difficult to learn without hands-on experience.

Fortunately, my husband had closely studied the milking stand used by the first owners. In a few days, he has built his own version of this helpful equipment.

“Well, this stand helps a lot, doesn’t it?” he says. “Vertical stanchions secure the doe comfortably. Grain in the trough keeps her occupied and calm. The raised platform brings the process up to eye level.”

Streams of white whoosh into the steel pot, and I become excited.

The enthusiasm continues until the streams slow down and stop. As I look into the pan, an unpleasant thought occurs to me.

“Jimmy, it would have been logical to taste goat milk before we bought the animals. Why didn’t we do this?”

He shrugs his shoulders.

“A lot depends on whether this tastes strange or not,” I add.

What if it tastes wild or goaty?

Today, milking Red may be a challenge because Jimmy is not here. I must do this by myself, alone, just me, no one else, solo . . .

Red watches intently as I enter the pen. I creep up on the black-and-white doe, hoping to get close enough to grab her collar. She’s leery because she does not trust me yet. Her expression and actions exhibit intelligence while quick, graceful movements demonstrate the reactions of a wild creature.

Chasing her is useless; she’s too fast. I try to trap her in the corner of the pen; she’s too smart. This intelligent animal knows that corners are a place where the human has the advantage, so she avoids them, positioning herself, instead, on the opposite side of the wooden stand. With this barrier between us, capture is impossible. I cannot jump across the platform, though she can, and it takes me too long to walk around.

After frantically chasing her for fifteen minutes, I sit down on the platform to catch my breath and form a plan.

Surely, I’m smarter than the goat! 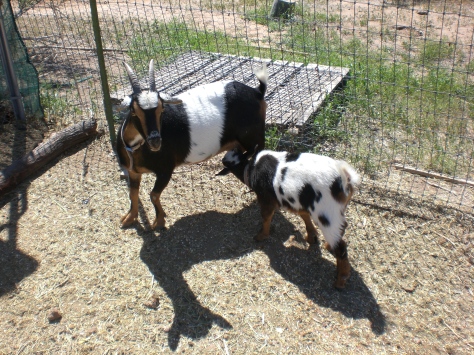 One month has passed since the goats first joined our family. My confidence has risen along with the animals’ trust in their new keepers.

At the coop gate, I adjust the lasso draped over my shoulder before entering the pen. Inside, I unroll a length of rope and then position the noose in one hand and the coils in the other. Although Red dodges and ducks, my underhanded-throwing technique catches her in one toss. I attach a rope to her collar.

The assertive command results in the doe’s instant obedience.

I latch the gate.

The smart animal walks to the milking stand but stops at the foot of the ramp even before I issue a command to do so. A smile spreads on my face.

Hooves prance up the ramp. She’s eager to put her head through the stanchion where grain and alfalfa await.

I throw my leg over the platform, like a cowboy, and snuggle up to the goat’s backend. One hand holds the steel pot under her udder while the other extracts milk. When the first teat empties, my hands switch tasks to drain the other one.

This closeness forms a bond between goat and human. I hear each sound and feel every movement the doe makes. When the feed runs out, she regurgitates her cud and chews without becoming restless.

Perhaps she’s developing a similar awareness of me.

Have I misjudged goats? These seem so gentle.

The future of these goats depends upon their ability to supply adequate milk for the family. Before Jimmy and I purchased these Nigerian Dwarf animals, he had suggested buying a different breed. “Nubians are well-known milkers,” he insisted.

Instead, we purchased the smaller variety because I was afraid of goats. I shudder, recalling my husband’s words, “We cannot keep all of the goats if we buy Nubians later.” He was referring to culling the existing animals for use as meat.

I reach out to pat Blue’s wiry fur; her small tail twitches in acknowledgement.

Good grief, what have I put into motion!