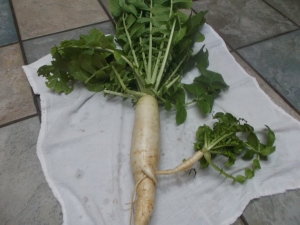 This Boule d’Or Turnip is often called a “Golden Ball.”

The arid Arizona climate and sandy soil encouraged this odd fellow to reach deep into the earth rather than form the traditional ball. The root of this little guy also grabbed his neighbor and strangled him to death! It’s survival of the fittest out there in the garden!
Although my homestead lies in the hot low desert, my family heritage comes from the South. So today, I use this interesting specimen to make my Southern Mamaw’s (grandmother’s) recipe for cookin’ up a mess of turnips and greens.

– – –
Mamaw’s Turnips and Greens
Separate the turnip from the greens. Rinse with water three times to remove dirt.
I only peel the turnip if it seems tough and stringy. (This one today is very tender.) Chop into whatever size pieces you prefer. I like my turnips at least ½” and the greens coarsely sliced. Put the greens into a large pot and fill with water until foliage is covered.  (Leave enough room at the top for the pot to bubble and to add turnips later.) Add salt to taste. (I use ½ teaspoon.) Bring to a boil, cover, and simmer for 15 minutes. Add turnips. Cook until turnips are tender. (Test with fork.)
Note: I always thought it odd that it took longer to cook the greens than the turnips but it does.

– – –
As for the taste of the Boule d’Or turnip, my precious Mamaw would have called it “larapin,” which, in Southern, means “Mmm, good!” In fact, only one thing would have made it better—some home-cooked cornbread to sop with. (Maybe in the next recipe.)
In the meantime, I’m definitely going to use this variety for seed-saving. This is the best turnip I’ve tasted—even if it is a bit odd-shaped and belligerent with its neighbor!