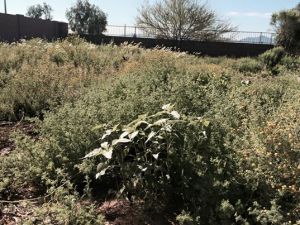 The first time I saw caliche was when my daughter, Tiffany, purchased her first home. A pale brown concrete-like substance covered the back yard. Not a weed or a single blade of grass broke through the hard pan. It was barren.

She and her husband dug holes for two trees with jackhammers. Tiffany wondered how to reclaim her yard so that she could have plants like the rest of the world. I had no idea how to help.

…If you listen to nature closely, you hear whispered secrets.

So when the first plant, a Brittlebush, pushed through the cement-like ground, Tiffany got an idea.

She purchased native wildflower mixes from Native Seeds/SEARCH. These are often used to stabilize disturbed earth to prevent erosion. In this case, she used them in an ‘undisturbed’ place to break down caliche.

She sent me this picture today. I’d say it’s working!

Unfortunately, the hard pan descends for several feet into the earth. She will have an ongoing battle with this foe. But the first round has been won!